UPDATE: GMST stuff is up!

3rd Part of the Legend Update

It’s finally August 4th and even before the patch there was already a surprise, two trailers! They’re identical except that one shows a male version of Demon Slayer and the other is a female one. The patch was very large, 169.89 MB (Download the PATCH file here)! Anyway, I already talked about most of the stuff in KMS so that will be no problem!

Demon Slayer Guide to this version, check it out! Now all the skills consume HP (super annoying…)…

Aside from that, nothing really to talk about.

Told you about this briefly here, but now I’ll get more detailed. There was also a new Miracle Cube added to get you to that rank! Here are the stats you can get from this rank (this is also updated to v.1.2.138):

That and the availability of the new decent skills!

The events I talked about here along with:

You will get Travel Pouches from any monsters. Open them and you may get: 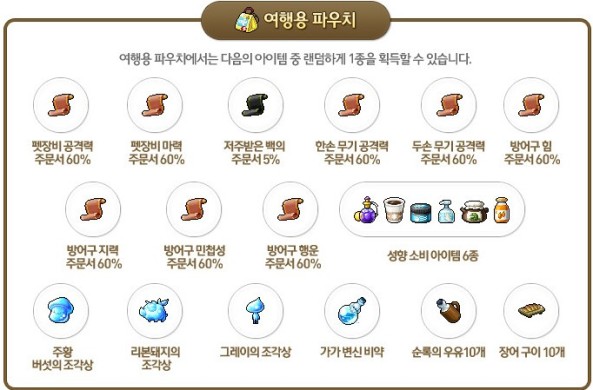 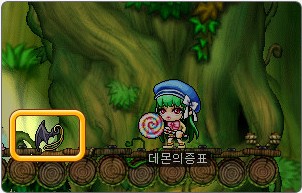 Nexon is taking a step away from book events (even though there is one right now), instead of having a dumb book they do the same concept without the book!

Same concept but at least it’s NOT A BOOK (still angry though).

That’s everything for this KMS update now…

THE EXCLUSIVE CONTENT IS CAPTURE THE FLAG. THAT AND THE RETURN & UPGRADE OF MONSTER BOOKS AND A NEW SYSTEM – SILENT CRUSADE.

It’s a new PvP mode! But before explaining, I’ll tell you why the ‘Exclusive’ is italicized. The new Monster Book system is the exact system that JMS has, so it’s not exclusive.

This update is going to be v.1.0 in GMS! How exciting.

A new mode was added to PvP called Capture the Flag:

It’s very simple, it’s just like the real Capture the Flag. There are two bases, Blue and Red:

And therefore there are two teams:

On those bases are two flags. The other team might take it! 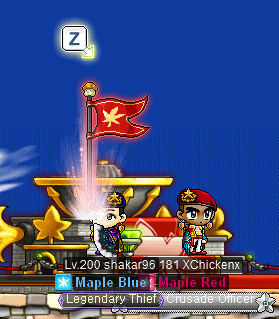 The flag can be picked up like an item and once you pick it up, it’s yours. However, if you die with the flag in your hands, the flag will be dropped and the other team may get it and it will return to their base.

The whole point is to somehow get the flag of the opposing team and then go back to your base to score. To score, you must have your flag at your base in addition to taking the opposing team’s flag to your base. The game is pretty long if both teams are good (10~20 minutes!) so it’s not certain who might win! However, if the score is like 3-1, the game is over. 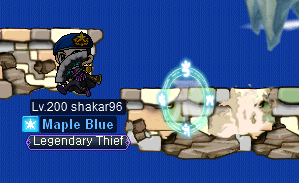 Flash Jump works so that’s kind of an unfair advantage. 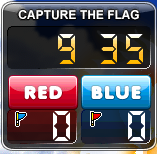 Oh and by the way you can get medals from this mode. It’s based on how many times you take down someone with the flag. The best medal is for doing it 5 times, and the medal gives you 3 on all stats.

It’s the same thing as the old one except better and more organized. 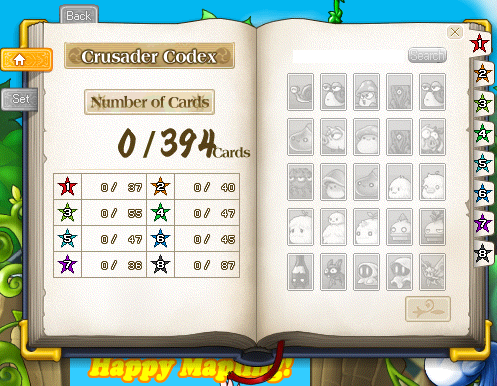 Yep, it’s organized by monsters’ levels and it looks better. For those of you who are unfamiliar with the Monster Book system, you basically kill monsters to get a Monster Card: 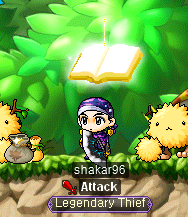 Unlike the old system, you can only get 1 and you only need 1. If you click on it, you can see every info you need: 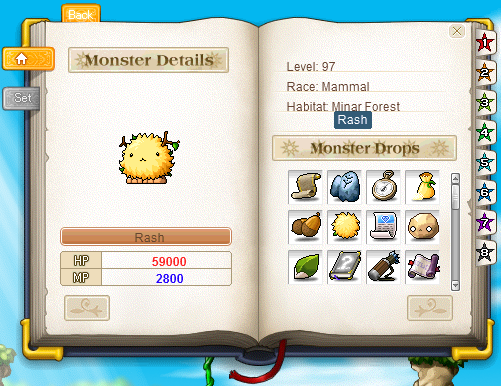 If you unlock a whole set, you get a special buff (unknown what it is yet). Sets are having a couple of cards of monsters that are somewhat related.

Also, each Monster Card will give you a certain amount of points. What are the points for? Well when you start collecting your Monster Cards you’ll get this book: 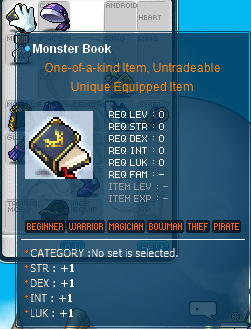 The book levels up and, if you complete the whole Monster Book, it will be +10 on all stats!

You can check out Fiel’s JMS extraction for more info on that.

The Silent Crusade is a secret group that specializes in eliminating strong monsters. You will get a serious of quests and you will be sent all over the place by Wence, the person in charge: 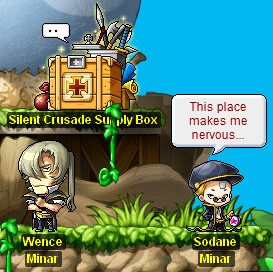 You will get a chain of quests. 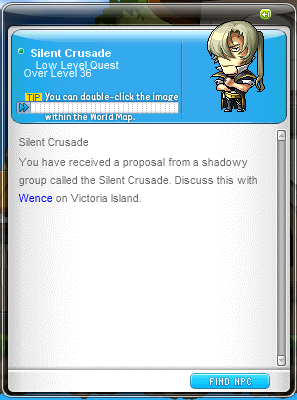 What are they all for? Well, there are rankings in the Silent Crusade. You need to complete as many quests as possible to get to a higher ranking. The rankings are for the supply box: 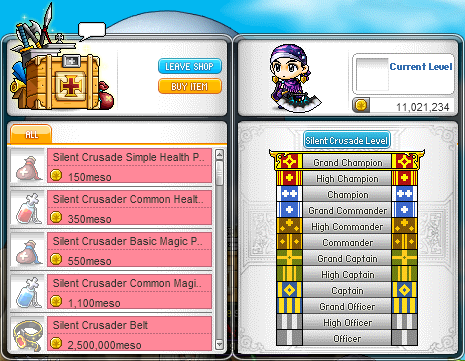 This is with officer being at the lowest ranking and Grand Champion being the highest. The shop will allow you to buy stuff if and only if your ranking is the required one to purchase it:

That’s everything it sells for a large amount of mesos. 50,000,000 mesos just to get that Crusader’s Zeal Necklace.

Alrighty now for the quests, I’ll give you a quick list: 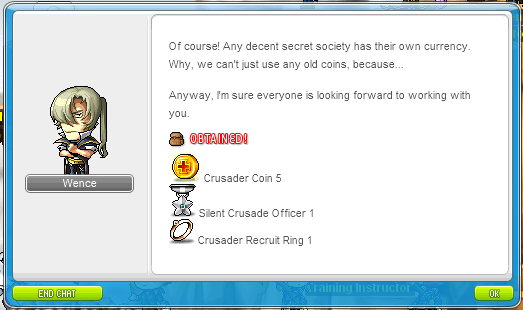 I’ll post all the equipment stats at the end… And for Crusader Coins, they are coins that you need to upgrade your medal and ranking. The amount needed will also be at the end. Next quest: 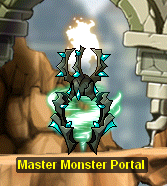 You will go to this map: 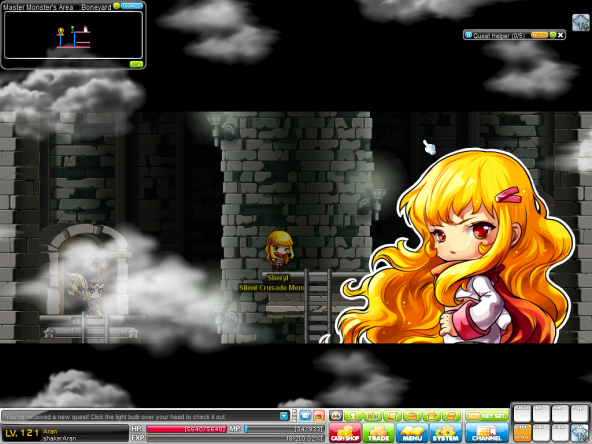 Talk to the girl (Sheryl) and she will want you to ‘take care of the Lord Skeleton for her.’ So do it: 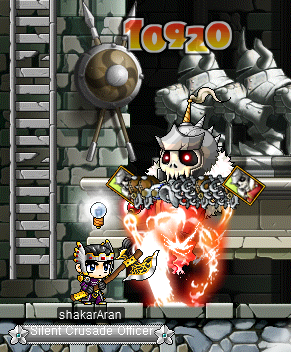 Go back and you’ll get 1 Crusader Coin.

Well, to upgrade your medal/ranking, you’ll need the following amount of coins:

The rest I don’t know yet, LOL.

The quests start to give you a lot of coins as you go on, though. When you’re a captain, you get around 20 coins! If you like traveling a lot, it should be easy for you.

I’ll be sure to update this when I know the missing info.

Oh and one more thing:

I don’t know what it says in Japanese… But you can view the person’s Monster Book: 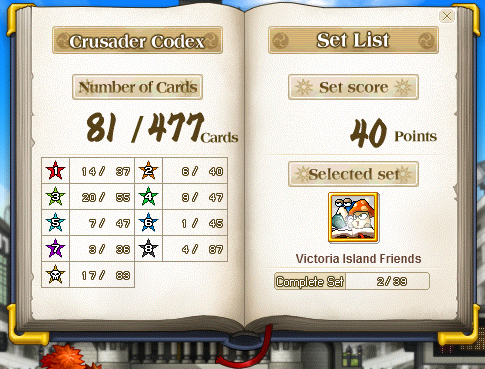 And along the Silent Crusade quests there should be some powerful monsters:

It will be released on Augst 10th. 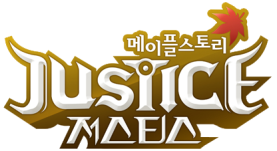 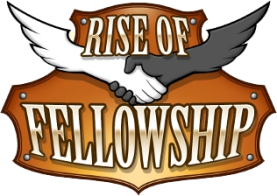